“Dave Siever always fancied himself as something of a musician, but also realized he did not necessarily sing or play in perfect key. Then he strapped on the electrodes of a device made by his Edmonton company, and zapped his brain’s auditory cortex with a mild dose of electricity. The result, he claims, was a dramatic improvement in his ability to hear pitch, including the sour notes he produced himself. ‘Now I tune everything and I practise my singing over and over and over again, because I’m more sensitive to it.’ Mr. Siever was not under the supervision of a doctor or psychologist, and nor is he one himself. He is part of an extraordinary trend that has amateur enthusiasts excited, and some scientists deeply nervous: do-it-yourself brain stimulation.”

With studies suggesting that small doses of electricity can: increase your memory, help you learn new tasks, make you better at math, turn you into a sniper in minutes, and most importantly make the ugly seem attractive, we can expect a lot of brain zapping in the next few years. 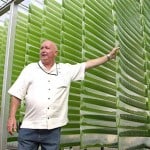 Ancient Roman Concrete Is About To Revolutionize Modern Architecture