Top 5 reasons NOT to buy organic

There are two separate issues here:

a) Your regular shop charges too much for it.

If you buy organic food in a supermarket it may very well be more expensive – but that’s because LOTS of things are more expensive in supermarkets: they just lure us in with the illusion of value. (And they’re good at it, too: that’s why the competition commission has to keep on slapping them down for doing things like raising prices to make the subsequent price cut more dramatic.)

If you shop at a local market, not only can you save about 50%, but you stay healthier by eating only fresh and seasonal food, have much less packaging to waste and feel terrible about throwing away, often find other good bargains, and most importantly you invest in your local community – £10 spent in your local market is worth £25 to the local economy, whereas £10 spent in a supermarket is worth only £14, because most of it zips away to head office to pay for TV adverts and expensive cars.

b) Other food is HUGELY subsidised, making it seem cheaper.

We are currently taxed £5.3 billion every year to subsidise current industrial farming methods (£3bn to farmers, £2.3bn on pollution cleanup). It’s been calculated that if we spend £1.2 billion every year for the next five years, all UK farms could convert to organic*.

That would mean we save £20 billion pounds in 5 years – about the same as we spend on education each year – and then free up another £5.3bn / year to invest in renewable energy. Huge.

* To be fair, I’ve not been able to corroborate that statement, but the numbers aren’t so important so long as they tend to zero, and end up delivering a system which requires less subsidy than the cost of conversion, which seems likely, especially with the ever rising cost of oil.

One definite bit of research though: In 2001 the UK pesticide market was worth about £500m per year. The cost of removing these from drinking water was £120m. That’s madness. And that’s before we even get on to the cancer rates, skin diseases, biodiversity loss, and so on.

3. It’s weirdly shaped and got spots on.

Hey, cut your food some slack! That described you, once, too, and you turned out to be pretty tasty.

4. I’m concerned about animal welfare, not pesticide use.

Excellent! You probably look for the Freedom Food label, go free range, and only eat meat once or twice a week. You are wonderful! Did you know, though, that the Organic Certification includes animal welfare standards?

Ah, now that is interesting. Which is more important? Sustainable communities with local employment, or organic farming? Well you’re probably not going to get good organic farming without the people there to do it, so ensuring you’re buying local to keep that going is massively important. But then so is the health of your local environment. If you’re interested in local livelihoods, soils, jobs, high employment, roi, 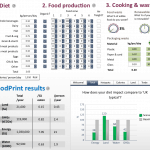 How we feed ourselves

Real democracy is rising on the horizon