Reasons to be cheerful: Peak Phosphorous

Graphs like this make me very happy because they hint that thing might all work out OK. 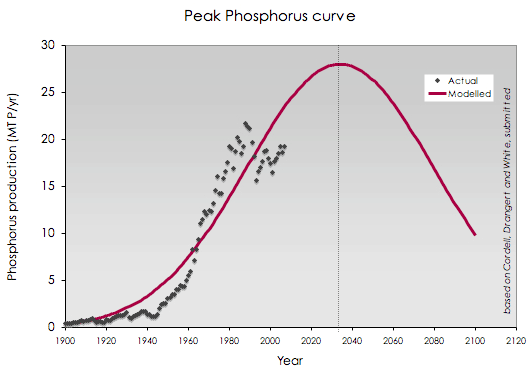 via Peak Phosphorus: the sequel to Peak Oil.

I’m sure you know that phosphorous is one of the critical components to the most abundantly used fertilisers. I’m sure you’ll also know that it’s what causing algal blooms, feeding plants which choke and exhaust water supplies, contaminating your drinking water, killing livestock, and generally eroding quality and adding cost to your life.

So it’s delightful to know that phosphorous, like oil, is running out. It will get more and more expensive and be used less and less. Does this mean that we’re going to run out of food? Good grief, no! There’s plenty of natural fertiliser all over the place – you even shit fertiliser. (It’s fun to be able to use that phrase literally). In fact more or less everything living shits fertiliser, so there’s no problem there.

In fact there’s no problem at all. The alternatives to contemporary methods of huge monoculture and factory farming are so much better for the planet (and everything on it) and still similarly productive that it’s stunning that we do things so badly now. The only reason we currently use such counter-productive methods now is because they’re a little bit ‘cheaper*’.

And as this graph shows, that balance is soon to be tipped, since all the inputs for large-scale farming are getting so expensive and unobtainable that we’re reaching the point where it actually becomes economically worthwhile to run a permaculture farm here in the UK.

Phew! And just in the nick of time, too.

* Which only goes to show how out of date our perception of ‘money’ is.

Gaming for a better world.